There was also fantastic Honda success in the MX2 class with Honda RedMoto Assomotor’s Mathys Boisrame finishing race two in second place giving him third overall and his first podium finish in the MX2 class.

Teammate Mitch Evans had an unlucky crash in race one hurting his back and shoulder. Unfortunately, Mitch had to miss race two and will now look to recuperate as fast as he can to try to be ready for Indonesia in two week’s time.

The EMX250 class saw a delighted Stephen Rubini, also of Team Honda RedMoto Assomotor finish the weekend in first overall and reclaim the championship leader’s red plate with a 10-point advantage over his nearest rival.

Rubini now has to wait until 4th August where the bottomless sand of Lommel will host the penultimate round of this year’s EMX250 Championship.

The next stop on the GP calendar visits the OPI Mall circuit at Palembang, Indonesia where all of Honda’s teams and riders will be hoping to maintain and improve on their results so far this year.

I was enjoying riding on the track this weekend. It was a really technical circuit with deep ruts which made line selection really important. I’m also really happy to take the holeshot in both races, as well as the qualifier yesterday, because we weren’t able to do that in the early part of the season but now we are getting the perfect jump out of the gate. In the first moto I did make a little mistake but I was still able to pick up the bike and remount as the leader, so that went okay. Then in the second race, I didn’t want to push too hard. I pulled out a lead of about five seconds and then kept it smooth because the track was a little sketchy in that second moto. The shadows and the sun was quite low which caused problems on certain parts of the track. However overall I’m very happy to win another overall and to extend my lead in the MXGP championship. I’m feeling really happy with how I rode and how the whole of Team HRC is working together. 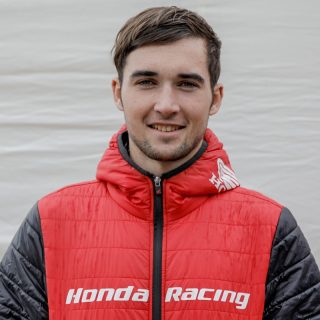 I really enjoyed the track this weekend. I really like the hard-packed conditions and the jumps and ruts. I found some really good lines and used them well in race two. It was so cool to finish race two in second place and to be on the podium in MX2 is really fantastic. It’s not easy racing at this level, but I hope for more success.

I’m really happy with my riding this weekend. I enjoyed riding here in Germany very much. The track is very technical - bumpy with lots of hard ruts. This is the kind of track I like.

I took great starts in all of the races which helped a lot. I now need to stay focused to win the championship. We have one race in the sand of Lommel and one race at the hard-packed track of Sweden. So it’s not done yet and we still need to work hard. I’ll try to keep the red plate until the end.

It’s been a fantastic weekend overall for Honda’s riders with podium results in all three categories - two of which were outright wins.

Stephen Rubini’s double race win has meant that he extends his lead to 10 points clear in the EMX250 Championship and retakes the series leader’s red-plate.

We’re extra-proud to see Mathys Boisrame’s results because it underlines our commitment to our rider development programme - taking riders from European Championship level, through MX2 and onto MXGP. Mathys had a superb weekend and it was his first ever podium in the MX2 class. It’s great to see our structure working and long may it continue.

Conversely, we’re sorry to see that Mitch Evans hurt himself in race one - crashing on the upslope of a take-off jump which can often mean a hard impact. He has suspected lower-back and shoulder injuries and we wish him a speedy recovery.

In the MXGP it was of course fantastic to see HRC’s Tim Gajser continue his winning streak and increase his championship lead going into the two Indonesian rounds. Another great result for Tim.

Jeremy van Horebeek finished the day in 9th overall with 8th and 9th in races one and two respectively. Jeremy now moves up to 7th in the championship on the Honda SR Motoblouz team - a solid result for the Belgian rider.