The third in the trio of FIM World Motocross Championship races took place today at the tight and twisty Mantova (Italy) circuit; and early-on we were greeted with blue skies and an autumn chill in the air.

In the MXGP class HRC’s Tim Gajser was hoping to increase his championship lead and retain the coveted leader’s red plate, whist Tim’s Australian team-mate Mitch Evans was focused on further improving his races results – a good start being critical in Mantova to avoid battling through a competitive field.

As the gate dropped in the MXGP class race one it was JM Honda Racing’s Dylan Walsh who took the holeshot and a superb early lead riding the production Honda CRF450R. The fast Kiwi rider set about putting down some stylish and consistent laps – chased hard by HRC’s Tim Gajser and Mitch Evans in second and third.

Gajser found a way past on lap four, soon followed by Mitch Evans. ‘Tiga’ went on to win the race with Mitch in fourth, whilst Walsh only managed six laps before ‘cooking’ his clutch, which put him out of the race.

Gajser fired his HRC CRF450RW into an early lead in race two and looked smooth and in-control until a small mistake on lap three dropped the Slovenian to second – and although he battled hard to regain the lead, he finished the race in second place, taking the overall Grand Prix win by six points to extended his lead in the championship.

Mitch Evans had a good day, adding 31 points to his 2020 GP tally with fourth and eighth places and hopes to continue his improvement in the MXGP class.

JM Honda Racing’s Dylan Walsh had a tough second race but managed to progress through the field from 19th on lap one to 15th at the finish – and six more points to his 2020 GP account.

In the MX2 class, Stefan Rubini’s Wednesday’s qualifying position showed great promise, but he struggled with poor starts and small crashes that spoilt his chances to score better points in the races. Today’s timed qualifying session once again saw Rubini in fourth position – another very promising start to the day.

Race one of the MX2 class was full of promise for Honda Racing Assomotor’s Stephen Rubini – his fourth place qualifying setting the team alight with high expectations. Sadly, the high hopes turned to disappointment as Rubini rounded lap one in 11th place and pulled out of the race after suffering an impact to his engine casing from another rider crashing into him, forcing him out of the race.

Stephen’s team-mate Alvin Östlund had another poor start and battled for most of the race in a non-points scoring position. Similar luck befell Honda 114 Motorsport’s Bailey Malkovich a poor start and 12th at the finish – his teammate Nathan Crawford not starting the race today due to a knee injury that requires rest and recuperation.

MX2 race two saw mid-pack starts from the CRF250Rs giving the riders a hard task to push forward. Australian Bailey Malkiewicz once again headed the Hondas home driving through the pack from 20th on lap one to finish 14th at the flag – his finish position disguising his performance and effort.

Honda Racing Assomotor’s Alvin Östlund progressed from 23rd to 16th at the finish, whilst Stephen Rubini suffered a second misfortune in race two with another DNF.

It’s an amazing feeling to be back on the top step of the podium. I’ve won many heats this year but never an overall, so I’m super happy to have been able to have done that at this round in Mantova. The races were nice, although I did get a little arm-pump towards the end of the first race which made it a little closer than I’d have liked but I still won, so that was good. Then in the second race I had another good start, and passed for the lead almost immediately. Unfortunately, I fell in the middle of the race and dropped back to second. I pushed hard to get the lead back but ended up second for first overall. A big thanks to everyone at Team HRC who have supported me this year and who have kept pushing me towards this goal. Next up is Spain and I can’t wait!

Today was a good day and a bit of a disappointing day too. In the first moto I got a good start, made a few passes and was in third for most of the race. I ended up fourth but it was still a good moto and I enjoyed running with the top guys. In moto two I didn’t get the best jump which made things difficult because it was still hard to pass, but I got back to eighth for fifth overall, which was the same as in Matterley Basin at the first GP of the year, so I’m pleased with that. I really wanted that podium today but it didn’t quite happen but there are still seven more rounds to get it done and that’s what I’m focusing on when we head to Spain. 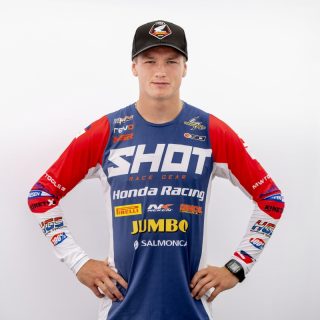 Qualifying wasn’t so bad. I ended up in 15th place. I had really good sector times, but I just couldn’t put it all together. That was a shame, but it’s an improvement over my qualifying times at the previous races here. Race one though was unbelievable. I lead the first 11 minutes and also had one of the best lap times of the race. That was a life-long dream of mine and really good to achieve this and it’s gives me a lot more experience and confidence coming into the next races. We had a small bike problem in race one, but that was my fault by being too aggressive with the clutch. In the second moto I was feeling good. I started in 10th and moved upon to eighth, but I tangled with another rider. I got back moving and did the best I could do in the moto. I feel like I’m making good progress with the team and I’m happy with how things are going.

Qualifying wasn’t how we wanted it to be. Everyone was pretty quick this morning, so my 14th gate pick made it hard for the starts. I definitely felt good on the bike though. I’m really having fun at the moment and I feel the best I have all season and feel like I belong inside the top-ten results. In race one I had a poor start and it took a long time to make it up to 12th place, but I had small crashes on the last two laps and that hurt my chances of a possible top-ten. Then in race two the start was a little bit better, but starting so far out wide into turn one it’s pretty much over before it’s started. I had to push through the pack again and made my way to 14th and that’s the best I could do in that race. I could do better, but it’s just how it was today. It wasn’t what I wanted, but I’m happy to finish these races safe and fit and we move into Spain to hopefully stay inside the top ten.

We were missing Nathan Crawford in the MX2 class due to knee injury, but his team-mate Bailey Malkiewicz delivered a fine 11th in race one. Unfortunately Stephen Rubini suffered an impact to his engine casing from another rider crashing into him during an attempted pass, damaging the casing with a large hole and losing all his oil - forcing Stephen to pull out of the race.
Rubini was also to suffer misfortune in race two with another DNF, which is so frustrating as he has speed for great results.

Malkiewicz scored a consistent tally again and continues to be comfortable in the points in his rookie year.

MXGP race one saw a CRF trio lead the race for the opening ten minutes. Dylan Walsh led from Tim Gajser and Mitch Evans. Dylan lost some places and made a costly fall dropping him out of the lead group and damaging his clutch. Tim went on to win with Mitch in a fine fourth place.

Jeremy Van Horebeek had a fall to put him out of his (at the time) ninth position, eventually finishing 14th at the flag. It was positive to see Valentin Guillod scores points with a fine 16th, recovering from his health issue.

Race two saw JVH89 crash on lap one and start from the back. At the 20 minute mark he crashed again after pulling his way up to 16th. Dylan Walsh crashed out of 8th place on lap three after positively moving up some positions on the opening laps. He pushed himself brilliantly back up to 15th.

Tim did ever so well to win the overall and extend his championship lead. Mitch Evans proving himself well with a fifth overall. The championship resumes in one week at the new venue in Madrid, Spain.

In EMX250 it was a successful return to the Honda family for double EMX150, CRF150 European Championship winner Emil Weckman. Placing seventh in EMX250 race one was a pleasure to see and a firm base to build on in the next weeks.