Gajser battles to a double race win in Italy, whilst Rubini continues his EMX250 podium run

Round four of the 2019 Motocross World Championship was held today at the spectacular Pietramurata track in Trentino, Northern Italy and it was Team HRC’s Tim Gajser who took the overall victory in the MXGP class – battling all the way with an on-form Tony Cairoli. Tim’s ecstatic army of devoted fans filled the valley with yellow smoke and screams as their Slovenia hero topped the podium once more.

The EMX250 class also featured Hondas battling at the front of the field with Team Assomotor RedMoto Honda’s Stephen Rubini backing up his round one second place with another second overall in Italy and his teammate Pierre Goupillon finished the day with a solid fourth overall.

St.Jean d’Angely, France hosts the next round round of the EMX250 championship on 25/26 May where Rubini is hoping his home fans will give him the lift he needs to top the podium.

It is unbelievable. It’s my first win in over a year and it’s just such a great feeling. To do it here at Arco di Trento is especially special because of all the Slovenian fans that made the trip to come and support me. I had two great battles today, we were both riding so fast but I think the fans gave me that extra boost I needed to take this victory. Every lap I could hear them and it was amazing to win in front of them, just to repay them for their energy that they gave me. I am also so happy for all of the members of Team HRC who work so hard to get me to this level, they all deserve a lot of praise for the effort they put in every week, so a big thanks to them too. Now, there is a bit of a break until the next race but we are heading in the right direction and I can’t wait to try and put this Honda CRF450RW on the top step of the podium again.

The first race I didn’t have the best start and I also crashed, taking too long to get back going because I got stuck under the bike. This left me a long way behind, but I got to work and despite this being a difficult track to pass on, I worked my way back inside the top 20, ending up 19th. Obviously I knew that I needed to improve my start and that’s exactly what happened in the second moto. I rounded the first few turns inside the top 10 and that’s where I was able to finish. You could see that if I can fight with those riders, I can finish in these good positions, so that was another step in the right direction. I improved my season best result with this ninth place but I know I need to keep working and that’s what we are going to do in this break.

I’ve not raced at Trentino before but it’s a cool track. It just took me a while to learn it. I tweeked my knee in the qualifying race and that made it a struggle to come through the pack as it was a little one-line out there. But no excuses, I know what I need to do to improve.

For the races, I strapped up my knee and pushed through the pain and got good starts. From 24th in the qualifying race to seventh overall today, I couldn’t be any happier and really pleased with how Sunday went. 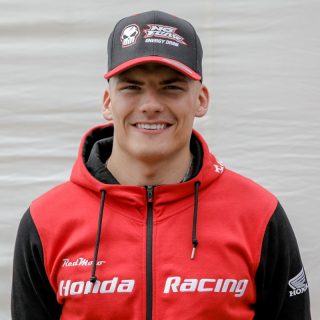 I was struggling a lot in the first 15 minute of Moto 1. I wanted to make passes and push forward, but I finished the race in 14th which I wasn’t so happy about. I had a better start in Moto 2 and was a little lucky in the first turn because a few guys crashed. I was feeling good right from the start and I hope to ride more like that in the future because I feel that’s where I belong.

It was a good weekend overall. I had some good starts in the races and pushed hard.
On Saturday the track was quite muddy and it wasn’t easy to pass. I found it hard to focus for the whole race so I had a small crash in race one. The track was drier on Sunday and there were more racing lines. I didn’t win today, but I’m happy with second. I took some good points for the championship and I’ll try hard to get the win at the next race.

It’s been a really positive weekend for our EMX250 and MX2 riders - and of course Tim Gajser’s double win in MXGP.

Stephen Rubini made it onto the podium again in second overall - and fourth overall for Pierre Goupillon’s is really good for the championship. We’re still denied the race wins that we’re capable of - so we’ll all keep working towards the victories we deserve.

In MX2 I saw some positive riding, but again the results don’t match the on-track performances or the riders’ ability and speed. Small problems can produce big effects - bad starts and small crashes are all part of racing, but again here in Trentino the riding was much better than the results show for some of the boys. Mitch was riding with injuries. Mathys Boisramé is recovering from injury, yet they were still able to produce great lap times.

We now have a short break until the next rounds - so everyone can regroup, recover from injury and continue to work to realise their full potential.

Overall, a positive weekend but we’re very sorry for Chihiro Notsuka’s injury and also Calvin Vlaanderen and we wish them both a speedy recovery.