The amazing mountainous area of Trentino, provided a great backdrop for some great racing as Michele Cervellin and Tim Gajser gave the Italian and Slovenians fans something to cheer about in the MX2 and MXGP classes.

For Cervellin, it was an excellent return to action after he had missed the previous two MXGP’s with a knee injury. The Martin Racing rider got out to a great start in the first moto and held his own as battled to a sixth place finish. He wasn’t quite able to match it in moto two as he ended up 11th, but a seventh overall is extremely positive for a comeback ride.

In MX2, Calvin Vlaanderen also suffered a crash in the first turn which forced the HRC rider to retire from that moto. However with renewed energy, the South African came out for moto two and scored a fifth place, his best result of the season so far.

After a hard-fought 13th in race one, Bas Vaessen was riding inside the top 10 when he was landed on by another rider, six laps from the end. Thankfully, despite the nature of the incident, Vaessen was able to pick himself up and ride back to the pits before withdrawing from the race completely. Initial reports suggest that he is badly beaten up but relatively okay given the seriousness of the accident.

Team mate Hunter Lawrence also had a disappointing weekend, as the MX2 title contender was forced to pull-out from proceedings after Saturday’s qualification race. The Australian rider had crashed in timed practice and while initial scans didn’t show too much damage, it was only after he had to stop riding in the qualifier with too much pain, that the new scans then showed that he had broken his middle metacarpal in his right hand. Obviously that means he’ll be missing Portugal but he is hopeful of a return for the Russian MXGP on May 1st.

With it being an off-weekend for the EMX250 class, the Assomotor team decided to bounce Mathys Boisrame up into the MX2 division for this round and the young French rider acquitted himself well, getting a 14th in the second race. He will be back to the EMX250 class next weekend in Portugal though, but with some nice confidence after a positive experience here in Italy.

Both Vamo Racing riders Marshal Weltin and Micha-Boy de Waal also had a tough weekend on this tight and technical Trentino track, as they finished just outside the top 20 in their motos. They did fight right up until the chequered flag, showing good fitness and will hope that Portugal shows them better fortune in a week’s time.

Agueda is the host track for the MXGP of Portugal, with the loamy circuit likely to make for some more great action as the MXGP and MX2 classes are joined by the EMX250 championship once again.

It was nice to be back riding, especially at a home GP. I missed two races, Valkenswaard and Red Sand but I really wanted to be fit enough for this race. Now we start the season again, it’s still a lot of rounds left so I want to continue this form. In the first moto I got a good start and finished sixth which I was very happy with. Unfortunately, I made a mistake off the start in race two and I could only finish 11th but it was still good to come back and score these points. 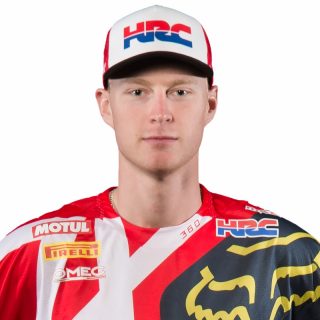 I was second at the end of warm up and felt really good on the bike as well as comfortable with the track. I had a not-so-bad start to race one and I was around tenth place entering turn one, but then another rider crashed into me and hurt my shoulder quite badly. We did all we could to take part in the second moto and I wasn’t sure I was going to ride, but I did and I actually had a good start, too. When you race at the front you don’t really think about the pain – at least for a while – but after the first ten minutes it made its presence felt and I had no strength in my shoulder any more. So with all of that I’m really happy with fifth place in the second moto and hopefully we can build on this result.

The biggest welcome back to the Honda racing family to Michele Cervellin who had missed the previous two rounds with a knee injury. He rewarded us greatly with a fantastic sixth place in the first MX2 moto, before going onto get seventh overall. We are happy to see Miky back and it was the perfect place to re-join the series for him.
Calvin Vlaanderen was really unfortunate to have a crash in the first turn in the qualification race and a crash in the first turn in the first MX2 race. Then in the second race, he showed that with a good start, he can run top five, so that was a positive from the weekend, even if the overall results don’t show it.
There was however a big disappointment with the metacarpal injury to Hunter Lawrence. We hope he can return as fast as possible and maintain his level of performance from before the crash, when he does return, which will hopefully be in Russia.
Bas Vaessen was unlucky to suffer a crash because of another rider in the second race when he was sitting in 10th position. That was really disappointing for him. However it was good to see him holding his own in that position and it backed up his 10th overall in Red Sand at the last round, so hopefully he doesn’t have too much pain and can feature again in the top 10.
It was also great to see EMX250 rider Mathys Boisrame compete in MX2 and score 14th place in the second race, a very good demonstration of his ability in a difficult class.
There has been some frustration this weekend with some first corner crashes for many of our riders but we look forward to having another chance next week in Portugal to demonstrate the full potential of all our riders.