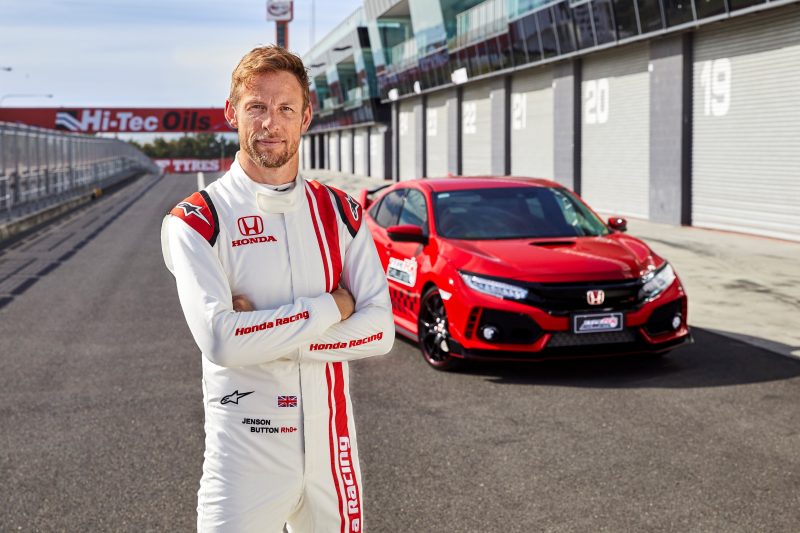 Mount Panorama is best known as the home of the Bathurst 1000 motor race, held each October. An incredibly challenging track for both man and machine, it’s technically a street circuit, as it is as a public road for 350 days each year when no racing events are being conducted. The current layout is 6.213 km in length with 23 corners and a 174-metre vertical difference between its lowest and highest points, not to mention gradients as steep as 1:6 or more than 16 per cent.

Button holds the unofficial lap record for the Mount Panorama circuit, a spectacular 1:48.8 lap time set in a Formula One car in 2011 as part of a special event to promote the Australian Grand Prix, so it was fitting that he was the driver to set a benchmark time in the Civic Type R.

This is the first time the Type R Challenge has taken place outside of Europe and Mount Panorama is arguably one of the greatest racetracks in the world, so it was the perfect venue to showcase the all-round brilliance of Honda’s latest Civic Type R.

Button was part of the fifth and final leg of the planned series of lap record attempts across Europe in 2018; his 2:10.19 lap around the Hungaroring Grand Prix circuit in Hungary was a new record, occurring at the same location where he won the first Grand Prix of his career with Honda in 2006.

“Anything you drive around Mount Panorama is pretty amazing. Up across the top of the mountain, the Type R is so fast through there, so once I got into a rhythm and got used to the speed you can carry, it was really good fun,” said Jenson Button, after returning from his final time-attack run.

“The Honda Civic Type R really is the perfect car for a time attack challenge like this. And it’s 100 per cent a road legal car that’s straight off the production line, so to do a 2 minute 35 second lap is fantastic.

“We came here to have fun and see what this amazing car can do around this iconic track and it did very well – it’s definitely an exciting car for enthusiasts.”

The latest Civic Type R has been engineered from the ground up to deliver the most rewarding driving experience in the hot hatch segment. It retains the heritage of Honda’s high performance hatchback bloodline, combining expertly tuned front-wheel drive chassis dynamics with aggressive design and finely-honed aerodynamics.

It offers an unrivalled combination of everyday usability and track-honed dynamism that has been recognized and praised by critics and experts from all sections of the motoring media, both in Australia and around the world.